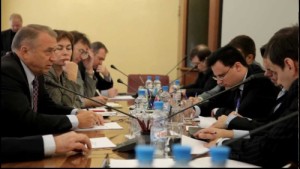 Similar to other translation types, in consecutive interpreting there are interpreters specialized in different fields. We appoint translators for an event depending on their field of specialization.

We have provided consecutive interpreting services for The National Assembly of the Republic of Azerbaijan, government agencies such as the State Property Committee, AZPETROL, private companies such as Aurora and Embawood.